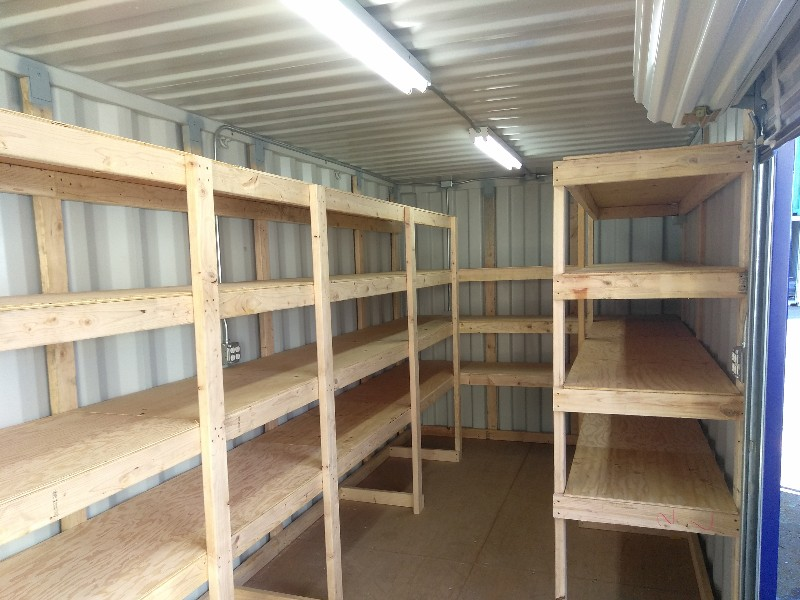 The one thing that caught my attention in the order was the 4 tier wood shelving that have to be in a ( J ) shape wrapped inside the shipping container.

We started with the roll up doors as they are easy to install "We install hundreds of them". And we want them done and out of our way. Since we are using the same tools and materials we did both doors one after the other.

We moved to installing the louvered vents. All four vents got installed at one shot. Mark, Cut, Install, Weld, Clean, Paint and done.

Next came the electrical part. The ceiling lights were the easy part as they are completely out of the way of the shelving. But one of the quad receptacles has to be centered on the side wall and in between the second and the third shelving tier. So the electrical plumbing had to be well thought of before start weld tacking the junction boxes in place.

We start with the junction box that feeds the ceiling lights which was mounted at the top center of the front wall. The rest was a smooth sailing.

This was suppose to be the easiest part of the whole modification. It's 2X4 studs and some plywood how hard it could be. Right!.

It turned up to be a nightmare. How to fasten the 2X4 wood studs to the steel walls without using steel brackets welded to the walls. If we do that "Using welded steel brackets" on a four tier shelving we have to wire wheel the weld burns from the outside and have to paint the whole container. Which was not an option. These were new 20 foot shipping containers after all.

After some thinking we end up using a steel flat bar fasten to the top of the 2X4 wooden studs and bolted to the top rail tube, the 2X4 is setting in the cavity of the corrugations to save on space. "No welds & No holes to the outside". Cool.

The other issue that arises was centering the vertical 2X4 wood studs at 4 feet apart. The shipping container steel wall corrugation did not cooperate at all and we still have the junction box in the center of the wall that need to be taking in consideration too. 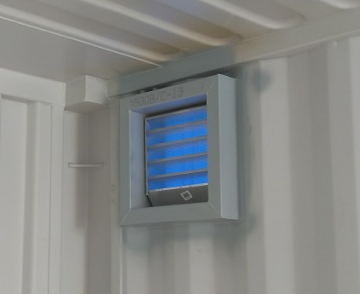 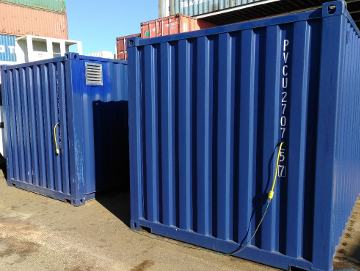 The shipping container tool storage was done on time.

The shelving inside the shipping container tool storage turn out to be verry strong and sturdy, It should handle much more than storing tools.

Drilling holes in the 2X4 wood studs before driving the screws in, saves the shelves framing from crackes and splits.

Electrical conduit comming down the walls end up flush with the horizontal 2X4. There was no need to notch the wood to clear the conduit.

Don't get me wrong. I know the customer is always right. And this shipping container tool storage came out exactly as the customer wanted.

The only thing i would done differently or changed in this mod is the container it self. If i am in need of four tier shelving i would have went with a high cube container instead of a standard height. That will give me a lot more room for the shelves.

One other thing i would have done is the position of the louvered vents. I would have installed one on the right side front top and the other on lift side rear bottom, this way the container get a better air circulation. Cold dry air comes in from the bottom vent and worm moist air exhaust from the top vent.

Shipping Container Modifications Is What We Do

So what are you waiting for?

You're here looking for shipping container tool storage right?
Stop wasting your time searching, We got all what you are looking for.
Get in touch with one of our cool sales representative to get a quote & answers to all your other questions.